CROSS-BORDER M&A FROM AND INTO ASIA

The panelists outlined their analysis of the current situation regarding four key questions. First, they evaluated the tightening AWG (foreign trade law) and upcoming EU regulation with respect to M&A with Asia. Then, they discussed the clash of cultures that impact post-merger integration. They further shared their thoughts about the internal decision making within Chinese enterprises regarding investment-choices and gave reason and outline to the Chinese outbound investment in Germany.

The panelists started by each giving their empirical opinion about Chinese outbound investments in Europe and in particular in Germany, especially considering the current market frame of trade wars, changes in regulations and the tightening of trade laws, on both sides. While the Chinese outbound investment has dropped significantly in recent years, it was, however, emphasized that there has been a 2.7% increase in investment in recent weeks and that the downward trend appears to be turning. The panel continued to discuss that among all investments into Europe only 3% comes from China including Hong Kong and Macau. However, an increase in consumer sector investments was noted in the context of a stronger focus of Asian investments in Europe.

To comment on the reasoning behind the Chinese decision making regarding collective choices of investment towards Europe and its framework of regulations and complications, the Chinese government was compared with a “helicopter parent” that intends to make investments as safe and sound as possible for Chinese businesses even if that means limiting good investment opportunities.

The panel then discussed the status and changes within the automotive sector. It was explained how people and businesses got used to consistant substantial growth since the great recession in the automotive market, but had to cope with severe decreases in the past year. A prognosis of stagnation rather than decline in the next year is seen stated despite the macroeconomic decrease in the automotive industry and the several reasons for pressure on the Chinese car industry.

The panelists collectively agreed, however, on the newfound focus of Asian investment and M&A towards the German market, mainly due to the US-Chinese trade tensions. In their opinion, this investment change will continue to grow even though Germany has in fact tightened its rules what led to many discussions in China.

Considering the frequent conflicts and problems with post-merger integration, it was reinforced that nationality is and should not be a necessary consideration when talking about investment options and opportunities.

The panel concluded with a reinforced statement that the Chinese decision of investment towards Germany is solely strategically based and offers many opportunities for business and investment that have not yet been explored, but will most definitely in the upcoming years. 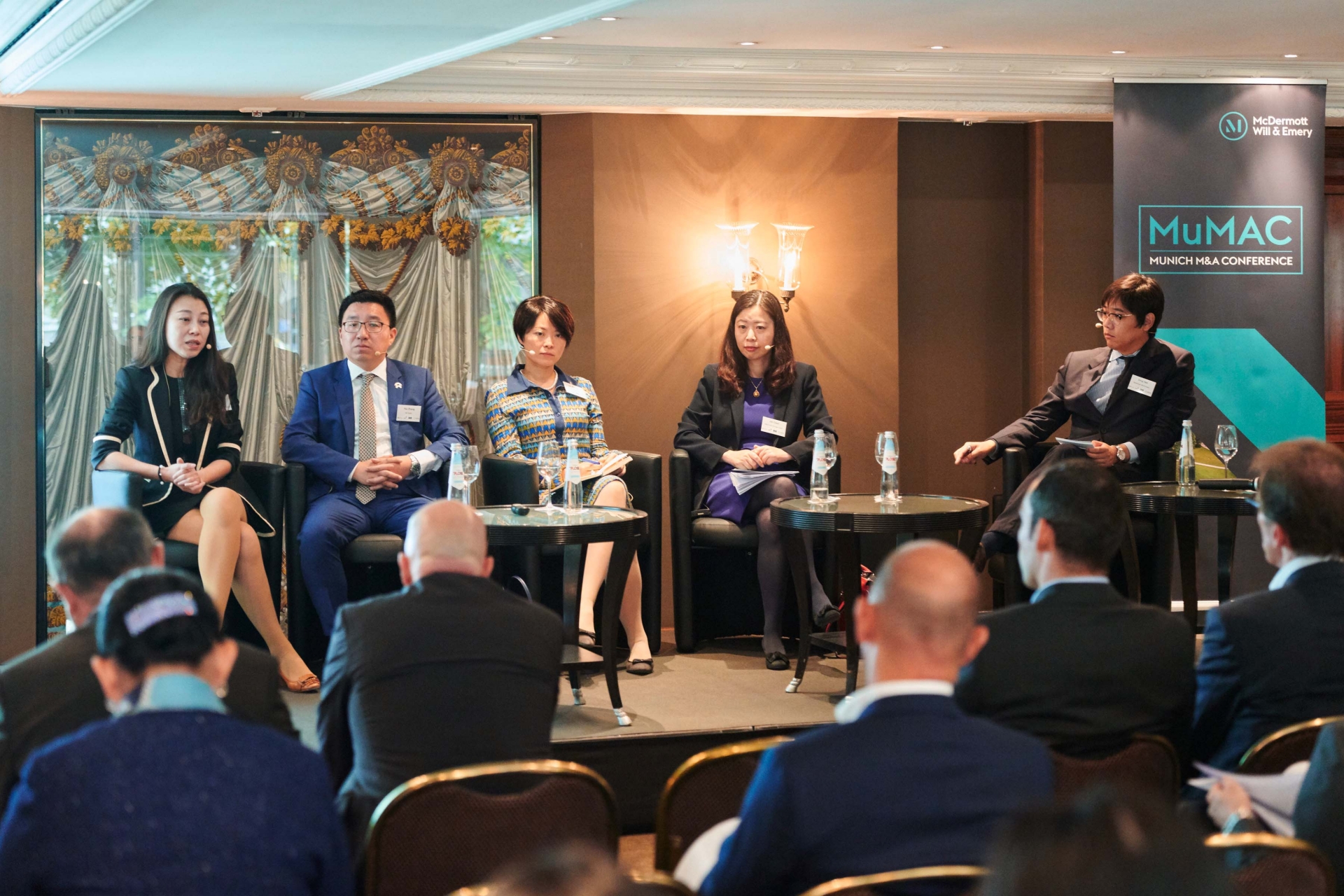 From left to right: Yao Sun, Haier Smart Europe; Hui Zhang, Nio; Dr. Mei Wu, Joyson Europe; Jin Chen, Sino-Ceef Europe; Ding Han, McDermott Will & Emery
KEYNOTE: THE WORLD IN DISORDER— END OF THE GROWTH CYCLE?
With her keynote speech, Dr. Daniela Schwarzer, director of the German Council on Foreign Relations, gave the audience an overview on the current geopolitical development in Europe and the world, and its impact on the economy. Following is a summary of the keypoints. To make sure that a dialogue between companies and policy makers is actually happening, institutions like the German Council on Foreign Relations are needed to react to the fast-developing world. This dialogue is important, as we live in a world that gets more and more risky and insecure. Business is already adjusting to these geopolitical and geo-economics challenges and changes; politics has to do so, as well. But, currently, German and European politics are struggling&n...
Read more
LIFE SCIENCES, HEALTH AND PRIVATE EQUITY
During this breakout session, moderator Sharon Lamb, Partner at McDermott, was joined by Georg Ganghofer, Head of Investments at Brockhaus Capital; Christoph Brandenberger, Managing Director at Brown Gibbons Lang; Tiemo Grimm, Principal at Nordic Capital; André Seidel, Senior Investment Manager at Nord Holding, and Dr. Ulrich Wandschneider, Operating Partner & Senior Advisor at Trilantic Europe. The first of the three key themes the panel discussed was the status of the life sciences and healthcare industries and opportunities for private equity firms on both sides of the Atlantic. After the financial crisis in the late 2000s, US private equity firms focused on healthcare and life science have experienced strong growth. Globally, private equity deals in healthcare in 2018 and 2019 have...
Read more
M&A IN THE FINTECH INDUSTRY

Thomas Hürlimann, Board of Directors at Hiscox; Roman Rittweger, CIO and Founder of ottonova Holding; Dr. Gerrit Seidel, Managing Director at yabeo; Nikolaus von Taysen, Founder of Payworks & Circula and Pay.On, as well as Kilian Thalhammer, Advisor, Investor, FinTech Expert at Wirecard discussed the current status and developments of M&A in the FinTech Industry with Julian Ostertag from Drake Star Partners leading as the moderator of the panel. Together, they discussed the impact of digitalization on the FinTech industry as well as the reasons and fundamental issues that make a FinTech successful and attractive for investors. The discussion then moved to an exchange of opinions about the current state of fundraising and the ongoing M&A activity within the industry.

Together with the panel lead, Dr. Rainer Bizenberger from AlixPartners in Munich, seven panelists discussed current issues on Crisis and Pre-Crisis Management.

The panelists in this discussion who participated were Dr. Uwe Goetker, Partner at McDermott Will & Emery in Düsseldorf; Jan Groß, responsible for restructuring at UniCredit Bank; Andreas Jaufer of Robus Capital Management; Daniel Jürgenschellert of Helbing Business Advisors in Düsseldorf; Alexander Reus, Partner at anchor Rechtsanwälte and active in insolvency advice; and Samuel E. Dewey, Counsel at McDermott Will & Emery in Washington.

Read more
M&A AND PRIVATE EQUITY MARKET 2019
The six panelists in this discussion, Dr. Florian von Alten, Managing Partner at Oaklins Germany; Carsten Hagenbucher, Managing Director at Charterhouse Capital Partners; Dr. Sven Oleownik, Partner and Head of Germany at GIMV Germany; Norman Rafael, Chief Corporate Development & Investor Relations Officer of Armacell International; Dominik Schwarz, Director at EMH; together with panel head Dr. Nikolaus von Jacobs, Partner at McDermott Will & Emery, discussed the development of the M&A and the Private Equity Market in 2019. The transaction numbers in the first half-year compared to the numbers last year are showing that the activity has decreased by close to 40% in the European Market. Especially transactions with Germa...
Read more
CROSS-BORDER M&A FROM AND TO THE UNITED STATES AND WITHIN EUROPE

Read more
POST-TRANSACTION VALUE CREATION
The panel discussion consisted of Sascha Günther from Oakley, Philipp Marquardt from AlixPartners, Arne Otto from Siemens Portfolio Companies, Dr. Karl Popp from SAP, and moderator Jens Weber from PwC. The discussion kicked off with the question of how the panelists are working with 100-day plans in the post-sale transition period. Interestingly, all the panelists shared the same opinion, more or less, despite their diverse professional backgrounds. From the panel’s perspective, it is important to create and have a 100-day plan when it comes to a transaction since it would provide great support for the structure and procedure of the post-transaction integration. However, it should be used as a guideline instead of hard rule, as in most cases three months are just not enough to achieve a su...
Read more
OPENING STATEMENT: PUTTING THE TRANSATLANTIC ECONOMY ON A FREE AND FAIR FOOTING019
The honor of opening the ninth Munich Cross-Border M&A and Private Equity Investment Conference was given to Meghan Gregonis, General Consul of the United States in Munich. The topic of the opening statement—putting the transatlantic economy on a free and fair footing—aptly complemented the focus of the conference: “10 Years of Growth – What Comes Next?”, as trade tensions these days seem to have an enormous impact on the markets. Consul General Gregonis’ remarks focused on the state of the trade relationship between the United States and the European Union, a partnership with a rich history of more than 70 years. After World War II, the institution of a free trade system not only lifted millions out of poverty and increased economic&nb...
Read more
Show more
Add to the home screen