Though the German economy is still strong and capital is still easily accessible, the panellists agreed that the market for restructuring and distressed M&A activity still does not present many opportunities. The number of corporations that had to file for insolvency has reached another relative low with only 21,700 cases (compared to 34,040 cases in 2006). Nevertheless, there have been a number of major and quite interesting cases, such as AirBerlin, Solarworld, Unister and Rickmers in which some of the panellists have played a significant role.

After discussing a general overview of the market, the panel focused on the transformation process in the automotive industry. This industry is currently facing a number of challenges, such as the diesel scandal, e-mobility, autonomous driving and car sharing. These challenges will lead to high development costs, a shift in technology and, from a longterm perspective, a reduced number of sold cars. The panellists agreed that whereas German OEMs and large Tier 1 suppliers may be well-prepared for these challenges, medium and small-sized suppliers will be facing more difficulties. This is mainly driven by an anticipated change in the product mix and shift from combustion engines, powertrains, gear boxes, and casting parts, etc., to electric engines and respective equipment. However, the panellists believe that such a transformation process will take longer than expected. Therefore, they do not think it will trigger a major restructuring wave in the short-term. Yet, the automotive industry is perceived as one of the fields that may yield the more interesting distressed M&A opportunities in the upcoming years.

The next round of discussion was devoted to another crucial industry: the German retail sector. Again, it was widely held that retail businesses in Germany are being threatened by a number of significant changes and challenges. Recently, this has had a major impact on German fashion retailers. The market has seen insolvencies of large companies such as Steilmann, Wohrl and SinnLeffers as well as a number of mid-caps, such as Rene Lezard, Basler, St. Emile, Madonna, and Pohland. In addition, there are a number of local retailers— often long-established with great reputations—that may have to close down their businesses for lack of a profitable business model for the future. The panellists agreed this is mainly due to both an increased market share of online players, such as Amazon and Zalando, and the growth of fast fashion and low budget retailers, such as Primark and Zara. Such players have created a highly competitive market environment and an urgent need to adapt one’s business model. Given the comparably small size of German fashion retailers and producers, the required change in their business models is often either not feasible in structural terms or cannot be sustained financially. The panellists agreed that any investment in a distressed fashion retailer or producer would be a challenge under such market conditions.

The panellists, moreover, discussed whether this trend should also be expected for other retail sectors, such as do-it-yourself markets and furniture sellers. They came to the conclusion that other retail sectors also need to prepare for the new competition and business models as there is a clear trend of increasing influence of online businesses in those sectors as well. However, the panellists strongly believe that the more complex and expensive the logistics involved are, the more difficult it will be for online businesses to gain a significant market share. Thus, other retail sectors may be better protected against online competition. In turn, there may well be interesting investment opportunities coming from those. 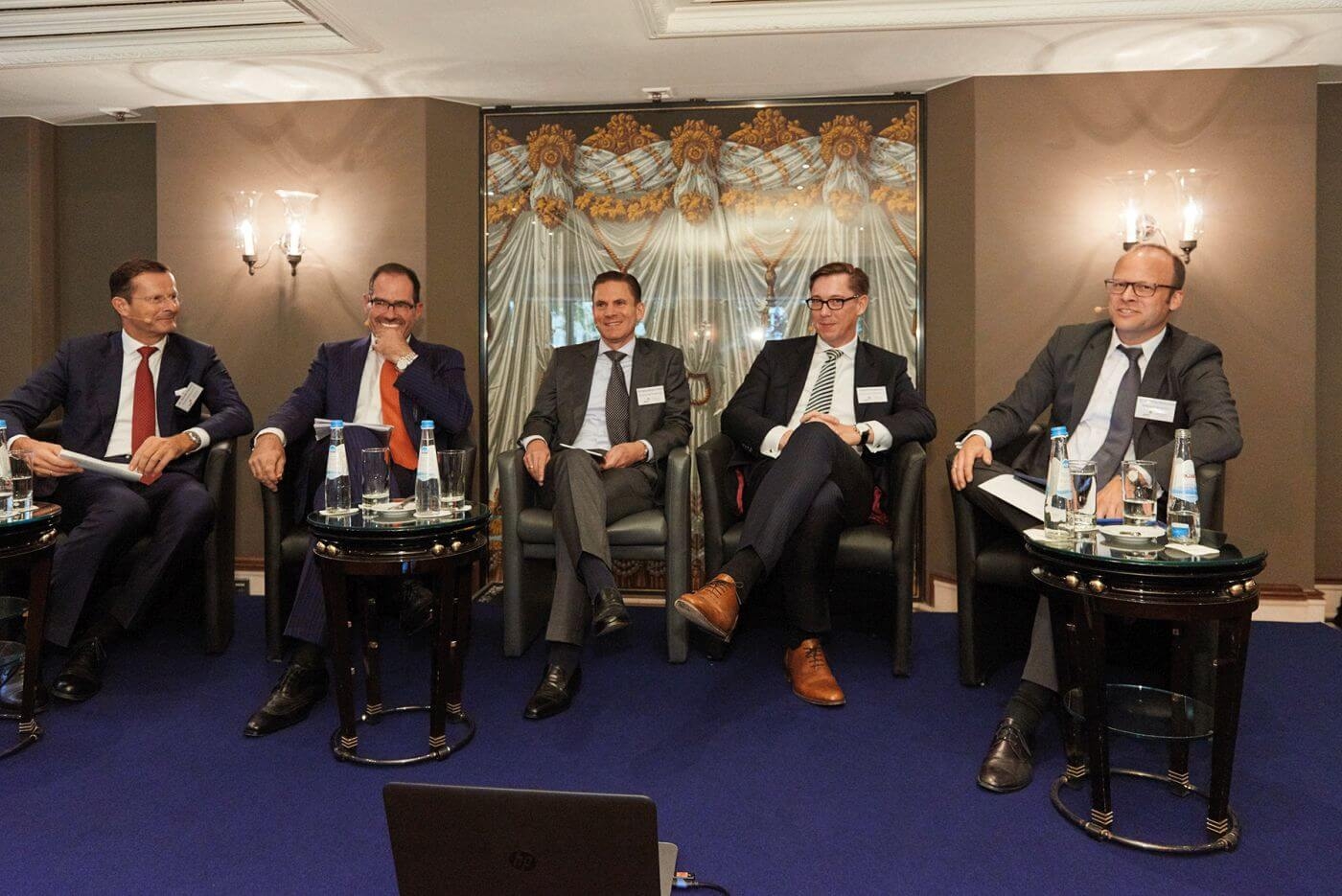 From left to right: Dr. Henrik Fastrich, Orlando Management AG; Frank Günther, One Square Advisors GmbH; Dr. Max Mayer-Eming, Macquarie Capital Europe) Limited; Marting Schwarzer, PwC AG; Dr. Matthias Kampshoff, McDermott Will & Emery
LIFE SCIENCES, HEALTH AND PRIVATE EQUITY
Dr. Stephan Rau and Kristian Werling, both from McDermott Will & Emery, moderated a thrilling panel on Health Care and Life Sciences M&A on both sides of the Atlantic. Hervé Ronin (Bryan Garnier & Co), Dr. Charles Niehaus (Alliance Medical), Benjamin Seifert (AUCTUS Capital Partners AG) and Dr. Oliver Schulte-Ladbeck (PwC) contemplated listing at the European state exchange, the competition of strategies and financials and the run for chief data officers (CDOs), chief marketing officers (CMOs) and other pharma services providers....
Read more
CASE STUDY – DUAL TRACK IPO/TRADE SALE: MYTH AND REALITY
Olivier Garnier, founder and managing partner of Bryan, Garnier & Co., and Khaled Bahi, Chief Financial Officer of Symetis, presented the acquisition of Symetis, the third largest player in the European market for transcatheter aortic valve implantation (TAVI), by Boston Scientific. Since its introduction in 2002 as a new ground-breaking procedure, TAVI has grown to become a $2.3 billion market with the expectation that it will increase to approximately $4 billion by 2020. Given the only alternative to treating Severe Aortic Stenosis (which affects 2 percent of the world population over the age of 65) is long and highly invasive open-heart surgery with general anaesthesia, it is not difficult to see why a procedure that requires only local anaesthesia and can be completed in 45 minutes...
Read more
FAMILY DIRECT INVESTING
The panel brought together representatives of family offices and family-backed investment vehicles from the United States and Europe; the discussion focused primarily on the challenges of cross-border direct investing. Each of the panellists noted the dramatic increase over the past few years of direct investing transactions, as well as the increased participation of family offices and family-backed investment vehicles in auctions and other competitive processes. The consensus was that this trend will continue and, in all likelihood, accelerate in the coming years. The panel was asked the following question: When you look at a cross-border investment opportunity, what strategies do you employ that might be different than in a domestic deal, for instance, around due diligence, local partner...
Read more
STRATEGIC BUSINESS DEVELOPMENT: FINDING THE RIGHT TARGET

Read more
M&A AND PRIVATE EQUITY MARKET 2017
Dr. Florian von Alten, Managing Partner of Oaklins Germany, Dr. Michael Drill, CEO and Managing Director of Lincoln International AG, Carsten Hagenbucher, Managing Director for corporate investment in Europe of Investcorp, Philipp von Mitzlaff, Business Development Director of Paragon Partners GmbH and Brendan P. O’Connor, Assistant General Counsel for Mergers & Acquisitions and Assistant Secretary of Honeywell International Inc., together with panel head Dr. Nikolaus von Jacobs of McDermott Will & Emery discussed the M&A and Private Equity market in 2017. The panel dove into the current market, highlighting the positive atmosphere as an increasing number of investors chase the limited number of deals available. This competition among investors has continued to drive up prices,...
Read more
AMBASSADOR WOLFGANG ISCHINGER: THE DECLINE OF THE INTERNATIONAL ORDER
Ambassador Wolfgang Ischinger, chair of the Munich Security Conference, led the MuMAC audience through the recent changes that have shaken the international. Ambassador Ischinger believes that the current international climate is the most dangerous it has been since the end of the Cold War. Central to this change are the “Five Losses” to the international order: the losses of prediction, truth, Western self-confidence and trust in institutions, regional and global decision- making capability, and the state monopoly of power. From the complete surprise with which the international community was caught by events, such as the Crimean Crisis to the growing emergence of nationalistic tendencies around the world, and increasingly aggressive rogue states, Ambassador Ischinger highlighted how norm...
Read more
TMT AND PRIVATE EQUITY
Olya Klüppel (ESO Capital Group), Mathias Wahrenberger (Burda Digital), Gunther Thies (STP Informationstechnol­ogie) and Christopher Brackmann (Bridgepoint), together with moderator David Evans (Alvarez & Marsal), discussed current trends affecting transactions in the technology, media and telecommunications (TMT) sector. The panel began with a discussion of the practical challenges and opportunities for software businesses moving from tradi­tional licence models to software as a service. The increased proportion of recurring revenues makes businesses that have successfully started this transition attractive to private equity investors and other finance providers, which in turn drives increasing valuation multiples in this space. The panellists agreed that a private equity investor cou...
Read more
CROSS-BORDER M&A FROM THE UNITED STATES AND WITHIN EUROPE
This panel featured the insights of Melville Mummert (Raymond James), Dr. Carsten Böhm (McDermott Will & Emery), Daniel Cole (Marlin Equity Partners Limited), Robert Goldstein (McDermott Will & Emery), Andreas Bösenberg (Sun European Partners) and Chris McIntire (KPM Analytics).The panel highlighted disruptive factors, such as the US administration, but ended with a fairly optimistic outlook for 2018....
Read more
CASE STUDY: POWERTRAIN – A TRUE STORY OF GROWTH BY MEANS OF EUROPE-CHINA CROSS-BORDER M&A
Dr. Sven Oleownik, Partner and Head of Germany at Gimv Germany, discussed Gimv’s investment in Punch Powertrain, a Chinese-markets-oriented independent supplier of innovative, clean, powertrain technology. Dr. Oleownik showcased Gimv’s investment and exit process, as well as the strategic development all standing under the firm’s enquiry to get into the right market in China. Gimv, a European pioneer in Private Equity and Venture Capital, has a proven future-oriented strategy with a diversified portfolio of about 50 companies. Its key platforms of focus being smart industries, connected consumers, health care and sustainable cities. Building upon this strategy Gimv invested in the €35m EV (€15m equity and €20m debt) and negative E...
Read more
DEBT FINANCING: FUND OR BANK?

Read more
FUND FORMATION
1. The magic question: Is there an ideal investment funds structure for certain asset classes or investor types? With a view to market fund units to institutional investors, overseas funds usually have flexibility to adapt to individual investor requests, e.g., by setting up feeder fund structures. That flexibility allows tailoring to individual European fund investors requests. Further, overseas fund structures often do not have leverage restrictions and depositary bank requirements do not apply. As an important restriction, it is to be taken into account: Raising money in the EU is since 2013 a fully regulated activity subject to approval by the domestic investment fund supervisory authority. The resulting requirement is that raising money without having European AIFM-licence needs to be...
Read more
DIGITAL PLATFORM BUSINESS MODEL
Dr. Christian Figge, Vice President, General Atlantic, Jennifer Kelly, Chief Executive Officer, Founder, Minxli, Dr. Sven Oleownik, Partner, Head of Germany, Gimv Germany, Christoph Weigler, General Manager Germany, Uber Germany and Dr. Thomas von Werner, Managing Director, EMH Partners, discussed the impact of digitalisation on the way they do business. Dr. Michael Cziesla, Partner Private Equity / M&A, McDermott Will & Emery, moderated the panel. The panel mainly covered the following three areas: How Big Data and Artificial Intelligence Changes the Way We Do Business Regulatory Challenges for Digital Platforms M&A in a Digital World – Threats and Opportunities The industry as a whole is changing massively as a result of digitalisation. The panel started by discussing the i...
Read more
Show more
Add to the home screen