The first 6 months of 2018 have shown a record deal activity. The M&A deal value has increased by 44 percent. Dr. Jens Kengelbach names four key drivers for this M&A activity: The conclusion of 22 mega deals in the first half of 2018, the US tax reform pumping up corporate cash offers, activist shareholders focusing on M&A and finally, private equity dry-powder continuing to strike records. At the same time, deals have gotten more expensive. In 2017, earnings before interest, tax, depreciation and amortization (EBITDA) multiples have reached the absolute record high.

There is an increasing number of deals—recently twice as often as five years ago—which announce synergies of a wide span across sectors. Generally, the markets reward the buyer’s synergy announcements. Moreover, synergy updates help investors to set up and maintain their merger models and investments thesis.

Dr. Jens Kengelbach named three things every corporate team should have “ready to deploy” during M&A procedures. First, estimated synergies should be communicated along with the deal announcement to mitigate uncertainty. Secondly, a “clean team” can be used to analyse sensitive information pre-closing to get a head start. Lastly, full potential plans help corporate acquirers to live up to the higher synergy promises and leave no stone unturned. 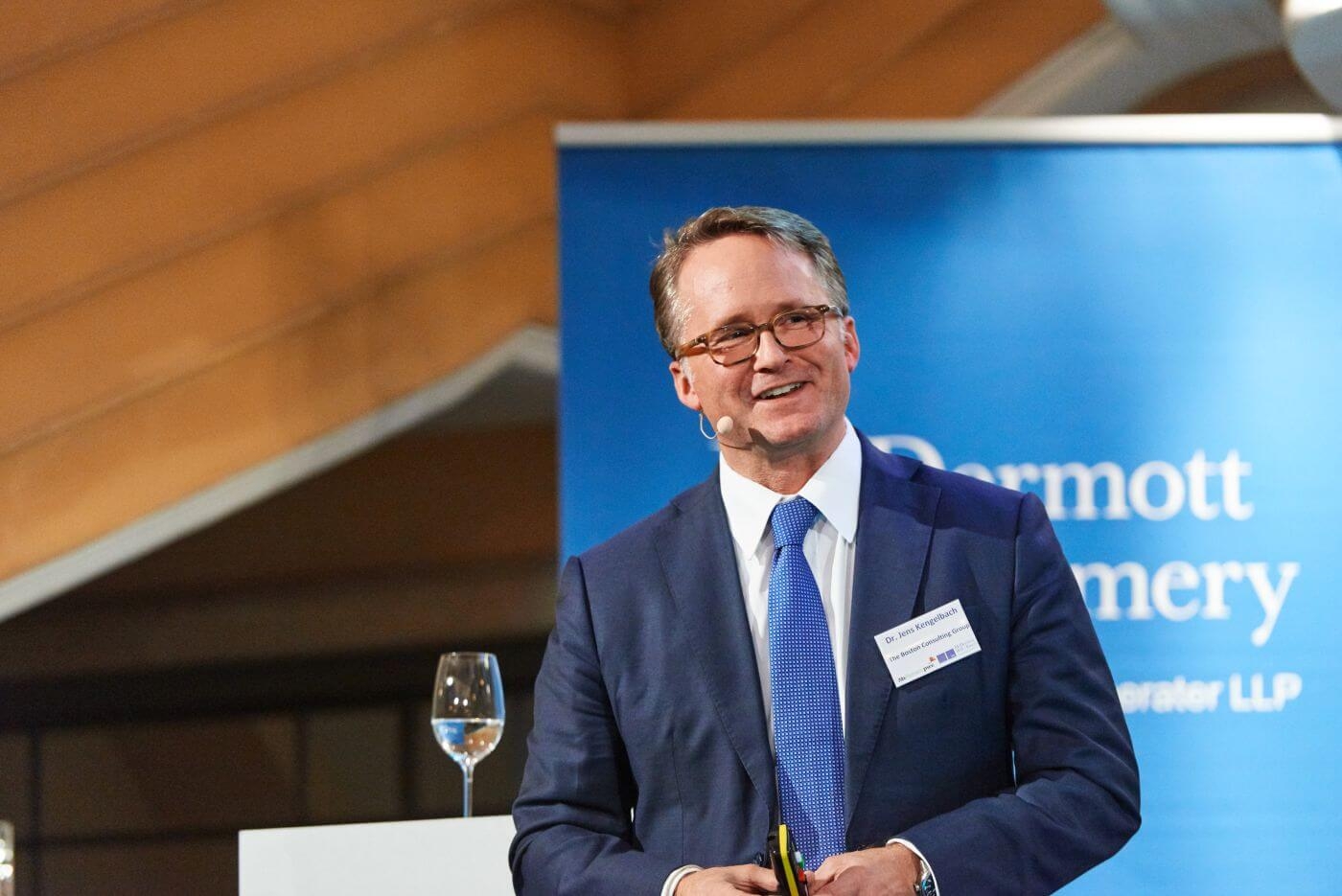 Read more
M&A AND PRIVATE EQUITY MARKET 2018
Dr. Florian von Alten, Managing Partner of Oaklins Germany, Dr. Michael Drill, CEO and Managing Director of Lincoln International, Dr. Ralf Schremper, Partner of Oakley Capital, Michael Siefke, Managing Director of Bain Capital together with panel head Dr. Nikolaus von Jacobs, partner at McDermott Will & Emery, discussed the M&A and Private Equity Market in 2018. The panel dove right into the current private equity market of 2018, mainly addressing the effects of the current trade tensions and the ways in which they are influencing the M&A market. Immediately it became clear that during trade conflicts legal advisory takes on a central role. The panellists observed a negative influence of the current trade conflicts—especially the tensions between the United States and China—on...
Read more
EVERGREEN AND M&A
Marco Brockhaus, CEO of Brockhaus Capital Manage­ment AG; Dr. Tobias Sitte, Managing Partner of Alphaville Capital; Philipp Haindl, Managing Director of Serafin Group; Richard G. Ramsauer, Managing Partner of VTC Industriebeteiligungen; Alexander Schemann, Managing Directors of Amira Holding; and Dr. Hans Wehrmann, Chairman of the Board of Certina Group; together with panel head Dr. Carsten Böhm, partner of McDermott Will & Emery discussed Evergreen and M&A. The players in the M&A niche market of Evergreens are typically family offices or groups of family offices, the latter being able to realize bigger deal sizes up to a couple of hundred million Euros in equity. Unlike to private equity funds, Evergreen investors have more of a long-term perspective and typically only buy maj...
Read more
CROSS-BORDER M&A FROM AND INTO ASIA
Tian Cai, Senior Investment Director of the Fosun Group; Inna Gehrt, Partner at Mandarin Capital Partners; Andreas Holtschneider, Partner at Cathay Capital; and Sung Yoon Woo, Chief Executive Officer and Co-Founder of Credian Partners; together with panel head Paul Kim, partner at McDermott Will & Emery discussed recent developments in Cross Border M&A from and into Asia. The panellists outlined their analysis of the current situation regarding four key questions. First they evaluated the emergence of new attractive sectors for cross-border investment from and into Asia. Then, they discussed the influence of the new regulatory measures adopted by the United States and Germany, as well as their effect on the consideration of Asian investors. After, the panellists turned to some of t...
Read more
POST M&A DISPUTE RESOLUTION
Natalie Graham, Head of GBC Claims Advocacy – Financial, Professional & Specialty, Aon Risk Solutions; Dr. Michael Hammes, Director of PwC, Kai Schumacher, Managing Director of Alix Partners; and Prof. Dr. Holger Peres, partner at Beiten Burkhardt, together with panel head Christian von Sydow, partner at McDermott Will & Emery discussed the post M&A dispute resolution. To begin, the panel noticed a trend towards more and more post M&A disputes. The panel identified several reasons for this development. The increasing values of the transactions render the perspective of post M&A disputes more and more interesting, all the more so because the sophistication of the buyers augments similarly. The panellists observed that after nearly every M&A transaction buyers could—i...
Read more
AUTOMATED INTELLIGENCE, MOBILITY AND PRIVATE EQUITY
Under the guidance of Jens Haas, Managing Director at Alix Partners, the panellists Dr. Carl Friedrich Eckhardt, Head of CoC Urban Mobility at BMW; Nicolas D. Gutbrod, Director of Helbing Business Advisors; Nikolaus Waser, Vice President and Head of Watson IoT Global HQ & Center Munich of IBM Watson; as well as Fabian Wasmus, Managing Director at Vitruvian Partners discussed the future and evolution of the Mobility Market and its effects on the private equity sector. The panellists started out by asserting the dramatic pace of developments in the mobility market. Next to the tremendous velocity of technological advancements, consumer needs change and diversify more quickly than ever. The panellists agreed that next to important hardware components, such as hybrid and electric motorizat...
Read more
KEYNOTE: THE EUROPEAN M&A MARKET: IMPACT OF GLOBAL AND SECTORIAL DYNAMICS
On September 25, 2018, Patrick Frowein, Member of the Management Committee Germany of Deutsche Bank, led the MuMAC audience through the recent developments in the European M&A market, concentrating on the impact of global and sectorial dynamics. Currently global equities are at a new high. While US equities have continued to have an outstanding performance in 2018, European equities have recovered from a slight decline in the first quarter of 2018 and are expected to further increase during the rest of the year. Equally, a new record year of M&A is coming up. The volatility of the market has decreased after recent spikes, leaving the VIX index at about 12 in September 2018, a considerable decline from the high of more than 30 in February 2018, although at an higher level than in 20...
Read more
KEYNOTE: DIGITIZATION IN EUROPE – THE CHALLENGE IN BETWEEN THE US AND CHINA