TRANSATLANTIC RELATIONS AT A TIME OF INCREASED TRADE TENSIONS

The Consul General began with reaffirming the United States’ commitment to Europe’s security and to the American-European Partnership, as well as to the NATO alliance. According to the Consul General, it still is the United States’ objective to advance free and fair trade, while emphasizing the need to level the playing field in order to make the best use of the great potential for all the partners included.

The Consul General highlighted Europe’s and America’s co-dependence and transatlantic partnership by mentioning recent statistics. Currently 54 percent of foreign direct investment in the United States comes from Europe alone, and 64 percent of foreign direct investment (FDI) in Europe from the United States. Observing that with this investment also comes appointment, the Consul General added that American, as well as European, companies are the largest source of employment amongst foreign companies in America and in Europe. Bilateral Investment in research and development were similarly impressive as $72.3 billion were invested in 2015 between the United States and the European Union, which constitutes far more than any other investment between two international partners.

The Consul General did not fail to mention, that under the Trump administration the objective was not only to promote transatlantic trade relations, but also to ensure

a freer, fairer and, above all, more reciprocal trade. In light of the latest trade surplus of €64 billion in Germany in 2017, Gregonis expressed the current administration’s intention to eliminate regulatory and tariff hurdles that have kept American companies from competing in key sectors, such as agriculture.

The meeting on 25 July between EU Commissioner President Junker and President Trump was to be interpreted as a promising starting point to this agenda: Both parties agreed to work toward zero tariffs, zero nontariff-barriers and zero subsidies on non-auto-industrial goods. It was also decided to facilitate more exports of US liquefied natural gas to Europe in an effort to help Europe further diversify its energy sources.

The Consul General called upon the business community to follow President Trumps and President Juncker’s incite to an ambitious trade initiative benefiting the United States and the European Union.

Aside from the aggressive time line set by the US government in this regard, the Trump administration’s recently passed tax reform law further promotes foreign investments, which was identified by the Consul General to be one of the main reasons why European companies currently find the United States to be such an attractive investment opportunity.

According to the Consul General, the first step toward the achievement of these goals already lies in recent tremendous growth in the M&A sector on both sides of the Atlantic. This seems to be interpreted as an underlying optimism in our economy.

With negotiations underway for the trade deal between the United States and the European Union, the Consul General finally insisted that the business community must continue to invest in the future of this partnership, meaning to promote innovation, entrepreneurship and labour training.

The Consul General ended her inspiring speech by assuring the audience that the diplomatic lines between Washington, Brussels and Berlin remain open. 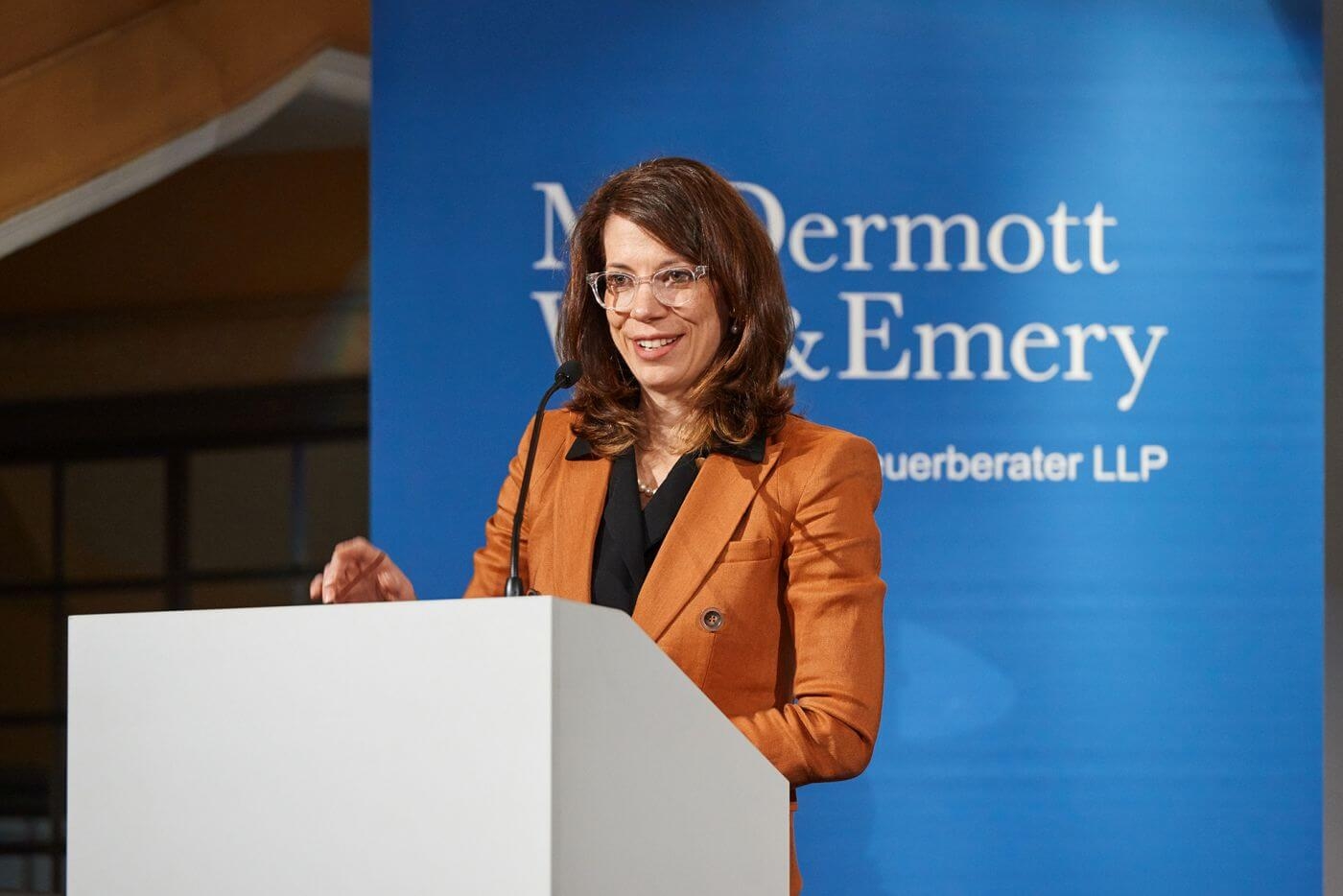 Read more
FINANCE
The panel featured Didier Beltai-Menth, Acquisition & Leveraged Finance of BayernLB; Adrian Cremer, Director of the Leveraged Finance Group of Société Générale; Paul H. F. Kim, Managing Partner in Financial Sponsor Debt Advisory of Herter & Co.; Dr. Nicolaus Loos, Co-founder, CEO and CIO of Deutsche Credit Capital Partners; Jurij Puth, Managing Director of GSO Capital Partners and Dr. Oliver Hahnelt, partner at McDermott Will & Emery. The panel gave an overview of the German LBO market, including finance surrounding the M&A transactions, the increased market shares of debt funds and the unique debt fund auctions. A main discussion point was the driving factors for debt funds. Most of the German is already covered in debt funds since last year. Whilst those debt funds wish t...
Read more
AUTOMATED INTELLIGENCE, MOBILITY AND PRIVATE EQUITY
Under the guidance of Jens Haas, Managing Director at Alix Partners, the panellists Dr. Carl Friedrich Eckhardt, Head of CoC Urban Mobility at BMW; Nicolas D. Gutbrod, Director of Helbing Business Advisors; Nikolaus Waser, Vice President and Head of Watson IoT Global HQ & Center Munich of IBM Watson; as well as Fabian Wasmus, Managing Director at Vitruvian Partners discussed the future and evolution of the Mobility Market and its effects on the private equity sector. The panellists started out by asserting the dramatic pace of developments in the mobility market. Next to the tremendous velocity of technological advancements, consumer needs change and diversify more quickly than ever. The panellists agreed that next to important hardware components, such as hybrid and electric motorizat...
Read more
M&A IN THE SOFTWARE INDUSTRY – TRENDS AND SUCCESS FACTORS
The panellists Matthias Allgaier, Managing Director of Summit Partners; Dr. Tobias Koppmann, partner at McDermott Will & Emery; Shawn McMorran, Managing Director of Marlin Equity Partners; Dr. Sven Oleownik, Partner and Head of Germany by Gimv Germany; Christian A. Resch, Managing Director of Goldman Sachs, Private Capital Investing; as well as Morten Weicher, Partner and Co-Founder of GRO Capital; and panel head Ralf Philipp Hofmann, Managing Partner and Member of the Global Executive Committee of Drake Star Partners, discussed the current trends of M&A in the software industry. The market boom of the software industry recorded in 2017 is continued in 2018. High-level transactions have repeatedly occurred during the last five consecutive quarters, such as the recent sale of Market...
Read more
EVERGREEN AND M&A
Marco Brockhaus, CEO of Brockhaus Capital Manage­ment AG; Dr. Tobias Sitte, Managing Partner of Alphaville Capital; Philipp Haindl, Managing Director of Serafin Group; Richard G. Ramsauer, Managing Partner of VTC Industriebeteiligungen; Alexander Schemann, Managing Directors of Amira Holding; and Dr. Hans Wehrmann, Chairman of the Board of Certina Group; together with panel head Dr. Carsten Böhm, partner of McDermott Will & Emery discussed Evergreen and M&A. The players in the M&A niche market of Evergreens are typically family offices or groups of family offices, the latter being able to realize bigger deal sizes up to a couple of hundred million Euros in equity. Unlike to private equity funds, Evergreen investors have more of a long-term perspective and typically only buy maj...
Read more
M&A AND PRIVATE EQUITY MARKET 2018
Dr. Florian von Alten, Managing Partner of Oaklins Germany, Dr. Michael Drill, CEO and Managing Director of Lincoln International, Dr. Ralf Schremper, Partner of Oakley Capital, Michael Siefke, Managing Director of Bain Capital together with panel head Dr. Nikolaus von Jacobs, partner at McDermott Will & Emery, discussed the M&A and Private Equity Market in 2018. The panel dove right into the current private equity market of 2018, mainly addressing the effects of the current trade tensions and the ways in which they are influencing the M&A market. Immediately it became clear that during trade conflicts legal advisory takes on a central role. The panellists observed a negative influence of the current trade conflicts—especially the tensions between the United States and China—on...
Read more
CASE STUDY: TAKE OVER OF FRIWO AG

Read more
KEYNOTE: STRETCHED TO THE MAX — HOW CURRENT PRICE LEVELS INFLUENCE INTEGRATION RIGOR
Dr. Jens Kengelbach, Senior Partner and Managing Director of BCG Munich, Global Head of M&A and leader of the BCG Transaction Center, discussed how current price levels influence Integration Rigor. The first 6 months of 2018 have shown a record deal activity. The M&A deal value has increased by 44 percent. Dr. Jens Kengelbach names four key drivers for this M&A activity: The conclusion of 22 mega deals in the first half of 2018, the US tax reform pumping up corporate cash offers, activist shareholders focusing on M&A and finally, private equity dry-powder continuing to strike records. At the same time, deals have gotten more expensive. In 2017, earnings before interest, tax, depreciation and amortization (EBITDA) multiples have reached the absolute record high....
Read more
KEYNOTE: THE EUROPEAN M&A MARKET: IMPACT OF GLOBAL AND SECTORIAL DYNAMICS
On September 25, 2018, Patrick Frowein, Member of the Management Committee Germany of Deutsche Bank, led the MuMAC audience through the recent developments in the European M&A market, concentrating on the impact of global and sectorial dynamics. Currently global equities are at a new high. While US equities have continued to have an outstanding performance in 2018, European equities have recovered from a slight decline in the first quarter of 2018 and are expected to further increase during the rest of the year. Equally, a new record year of M&A is coming up. The volatility of the market has decreased after recent spikes, leaving the VIX index at about 12 in September 2018, a considerable decline from the high of more than 30 in February 2018, although at an higher level than in 20...
Read more
CROSS-BORDER M&A FROM AND INTO ASIA
Tian Cai, Senior Investment Director of the Fosun Group; Inna Gehrt, Partner at Mandarin Capital Partners; Andreas Holtschneider, Partner at Cathay Capital; and Sung Yoon Woo, Chief Executive Officer and Co-Founder of Credian Partners; together with panel head Paul Kim, partner at McDermott Will & Emery discussed recent developments in Cross Border M&A from and into Asia. The panellists outlined their analysis of the current situation regarding four key questions. First they evaluated the emergence of new attractive sectors for cross-border investment from and into Asia. Then, they discussed the influence of the new regulatory measures adopted by the United States and Germany, as well as their effect on the consideration of Asian investors. After, the panellists turned to some of t...
Read more
KEYNOTE: DIGITIZATION IN EUROPE – THE CHALLENGE IN BETWEEN THE US AND CHINA